Reuben “Frank” Calderwood, 81, of 5 Merrill St., died Monday at a local hospital after a brief illness.

He was born in Portland, a son of James L. and Mary Towle Calderwood, and attended schools in Portland and South Portland.

Mr. Calderwood was a Navy veteran of World War II, when he served in the Pacific, and was also a veteran of the Korean War.

He was an electrician and worked for the C.M. &  H.T. Plummer Co., and the Stanley Leen Co., both of Portland.  He worked for Stultz Electric Co. in Westbrook and Portland Copper Works in South Portland and also for the Portsmouth Naval Shipyard, Kittery.

He was a foster parent for 18 years.

A funeral will be held at 1 p.m. Thursday at Chapel A of the Jones, Rich & Hutchins Funeral Home, 199 Woodford St.  Burial will be in Forest City Cemetery, South Portland. 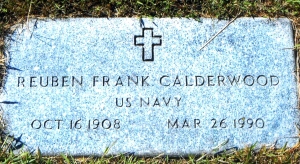