Norway – Charles C. York, 75, died Friday at Stephens Memorial Hospital where he had been a patient 10 days.

He was born in Brooklyn, N.Y., June 8, 1892, the son of John W. and J. Pauline Hunt York.  He was educated in Brookline schools and was an electrician for over 50 years.  Mr. York came here 35 years ago from Massachusetts.  He was a member of Oxford County United Parish, North Waterford, and was past grand of Norway Lodge, IOOF.  Mr. York was a member of Hill Grove Lodge, AF and AM, Brooklyn, N.Y.; past post commander of Stone-Smart Post, AL, member of Floyd A. Harlow Jr. Post VFW both of Norway; former state commander and member of SUV Joshua Chamberlain Post; and a member of Elizabeth Crockett Blake Tent, DUV.  Mr. York served in the 102nd AERO Squadron in France in World War I.  On June 28, 1922, he married Hilda E. Jatkola. 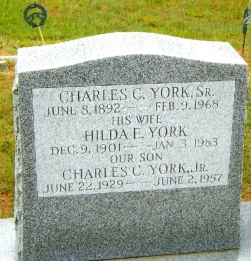