General Southard retired in February 1947 after 23 years service with the Maine National Guard and the armed forces of the United States.

His military career began in May 1902 when he enlisted in Company G, Second Regiment, MNG, and advanced progressively through successive enlistments to the rank of major in July 1910 when he was assigned to the field staff of the Second Regiment Infantry.

On June 19, 1916, Southard was sent to the Mexican border as a major, and in 1917, was inducted into federal service with the same rank.  He went to France in September 1917, with the rank of lieutenant-colonel, and participated in such engagements as the Champagne-Marne, Aisne-Marne, Meuse-Argonne, and was wounded in action July 21, 1918 at Aisne-Marne.

As a colonel, Southard was assigned April 8, 1941, as a commander of the Second Battalion Maine State Guard, stationed in Bangor, and was named full colonel January 1, 1945.  He was appointed commanding officer of Region Two, Maine State Guard, with headquarters in Bangor.

Funeral service will be at the funeral home on Wednesday at 2 p.m. 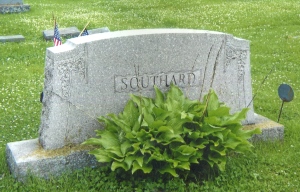